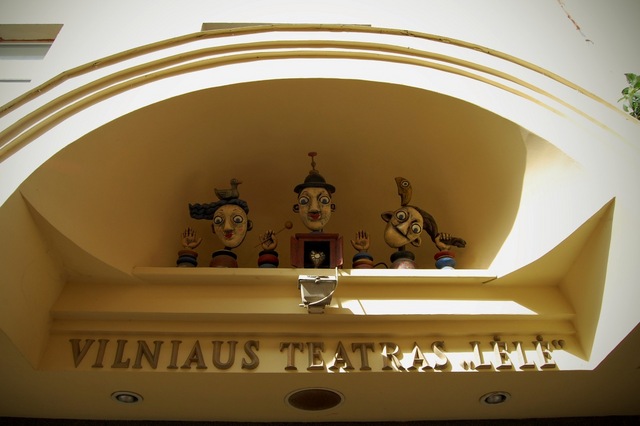 The Theatre “Lele” is settled in the former house of Duke Oginsky in the Old Town of Vilnius. In 1977 the house was restored, and the former Vilnius Puppet Theatre moved in under its new name “Lele”. The Ministry of Culture of the Republic of Lithuania is the founder and the sponsor of the theatre.

There are two halls in the theatre. The Great Hall, decorated in the Baroque style, seats about 220 spectators. Puppet plays of different genres and small-scale drama plays are performed on its small but modern stage. A number of international puppet theatre festivals were held here, the participants of the international festival LIFE gave their performances.

The Small Hall of “Lele”, which was settled in the Gothic basement of Oginsky House in 1992, seats only about 50 spectators. The small-scale puppet theatre plays, usually intended for the youngest viewers, are held here.

The Theatre “Lele” stages the Lithuanian and worldwide known fairy tales, as well as pieces of children’s literature by the popular Lithuanian and foreign authors, such as “Little Red Riding Hood”, “Three Little Pigs”, “Pinocchio”, “The Ugly Duckling”, “Nutcracker”, “Thumbelina”, “Alice in Wonderland”. Puppet plays for adult viewers are also performed at “Lele”. The plays for the theatre were created by such famous Lithuanian poets as Sigitas Geda and Marcelijus Martinaitis, and the music was composed by most outstanding Lithuanian creators of modern music Feliksas Bajoras, Faustas Latenas, Algirdas Martinaitis, Vidmantas Bartulis.

Vilnius Puppet Theatre, the predecessor of today’s “Lele”, was established in 1958 by the puppeteer, actor and director Balys Lukosius. Later the famous Lithuanian puppeteer and stage designer Vitalijus Mazuras joined the theatre and took the position of the leader. The plays he had staged, “Little Ash Duck”, “White Boy Nobody”, “The Lamb’s Dream”, “The Earth’s Daughter” etc, resulted in the aesthetic revolution of the 1970-1980’s East European puppet theatre art. Today V.Mazuras’ traditions at the Theatre “Lele” are pursued by his students, directors Rimas Driezis and Algirdas Mikutis.

Currently 12 professional actors puppeteers are employed at Vilnius Theatre “Lele”. They are all acting graduates of higher education institutions in Vilnius. The theatre is also proud to have a team of qualified and skilful puppet masters and designers who can make different kinds of puppets – tiny or large marionettes, shadow puppets, as well as masks for the actors.

“Lele” performances have been awarded at many international puppet theatre festivals. Although most tours are held in Lithuania, the theatre has also toured a number of foreign countries such as Germany, Algeria, Ethiopia, Finland, Denmark, England, USA, Austria, India, Kazakhstan, Poland, Latvia, Estonia, Russia, Ukraine, Slovak Republic. On tours the plays were performed in the English, Russian, Polish, German and French languages. Since 1966 the theatre has been the participant at the festivals of the International Puppeteers Organization UNIMA; the national center of UNIMA operates at the theatre. “Lele” also contributes to the activities of the international organization ASSITEJ.

The team of Vilnius Theatre “Lele” does their best to keep the theatre open to not only the best traditions of children’s puppet theatre but also valuable trends of the modern theatre. Nevertheless, the primary aim is to retain the interest and the attention of both the youngest audience and the adults.